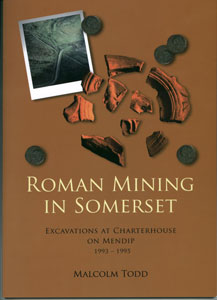 Roman Mining in Somerset, Excavations at Charterhouse on Mendip 1993-1995

This report records the results of the archaeological work at Charterhouse in 1993 and 1995 with emphasis on Roman mining in the first century AD.
SKU rmc Categories History, West Country / South West

The Mendip hills in Somerset have been exploited for their minerals from pre-history to the twentieth century.

This report records the results of the archaeological work at Charterhouse in 1993 and 1995. Central to the enquiry was Roman mining in the first century AD.

Details include rich deposits of pottery and coins found at the site and also recorded is a mass of animal bone of the same date. Discussion of the significance of Mendip minerals in the early Roman economy is appended.

This is the most recent account of Roman mining on Mendip and adds much to our knowledge of Roman occupation of the West Country.

There are no reviews yet.

Be the first to review “Roman Mining in Somerset, Excavations at Charterhouse on Mendip 1993-1995” Cancel reply

Menu
Facebook
Site designed by Digital Smithy all content © Stevens Books 2010 – 2020
We use the minimum cookies to ensure our site works, do you accept this? Privacy policyOkNo
You can revoke your consent any time using the Revoke consent button.Revoke consent